Some cookies on this site are essential, and the site won't work as expected without them. These cookies are set when you submit a form, login or interact with the site by doing something that goes beyond clicking on simple links.

We also use some non-essential cookies to anonymously track visitors or enhance your experience of the site. If you're not happy with this, we won't set these cookies but some nice features of the site may be unavailable.

Pilgrimage in Maria Luggau in the Lesachtal Valley

If you are on a pilgrimage in the Lesachtal valley, we will be delighted to warmly welcome you to our inn, Paternwirt!

The staff at the Paternwirt are ready to welcome hungry, thirsty pilgrims and offer delicious, comforting dishes cooked by our chef.

Maria Luggau – the religious centre of the Lesachtal valley

Believers and pilgrims from near and far come to our magnificent Basilica to ask for a blessing. Pilgrims come long distances not only on foot, but also by coach or other means of transport, to make the pilgrimage to the Sanctuary of Maria Luggau in the Lesachtal valley.

We specialise in welcoming groups of pilgrims to Der Paternwirt.   We are delighted to welcome and provide your group with refreshments in our restaurant. We strongly advise you to book in advance, although we have accommodated large groups arriving suddenly and offered them our special pilgrim’s menu and other delicacies.

You can also choose from our à-la-Carte menu for groups. 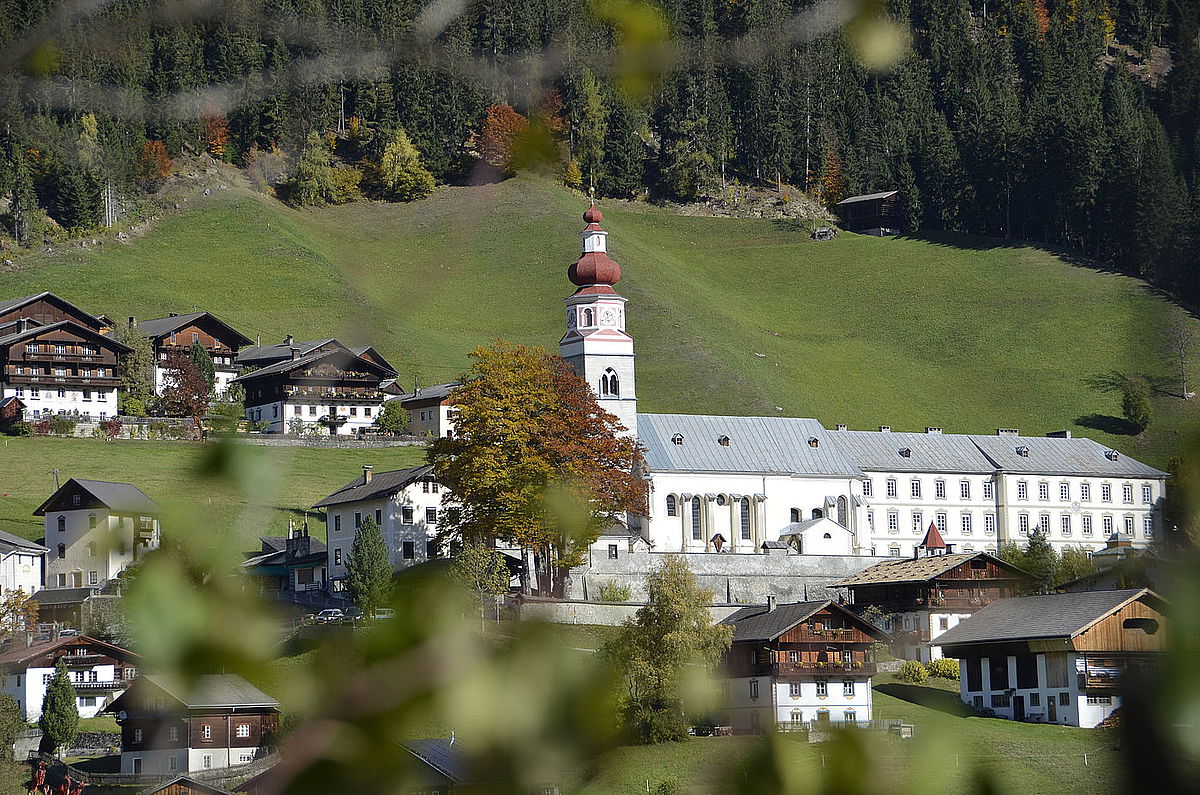 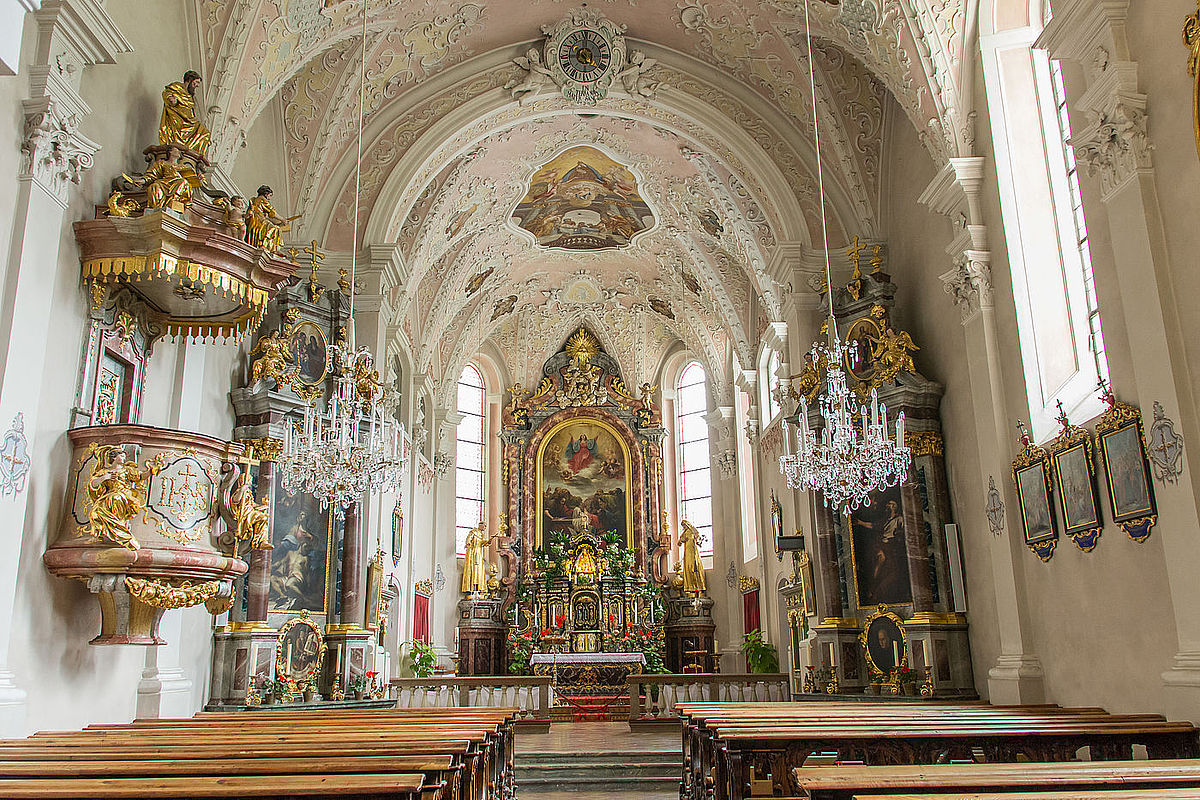 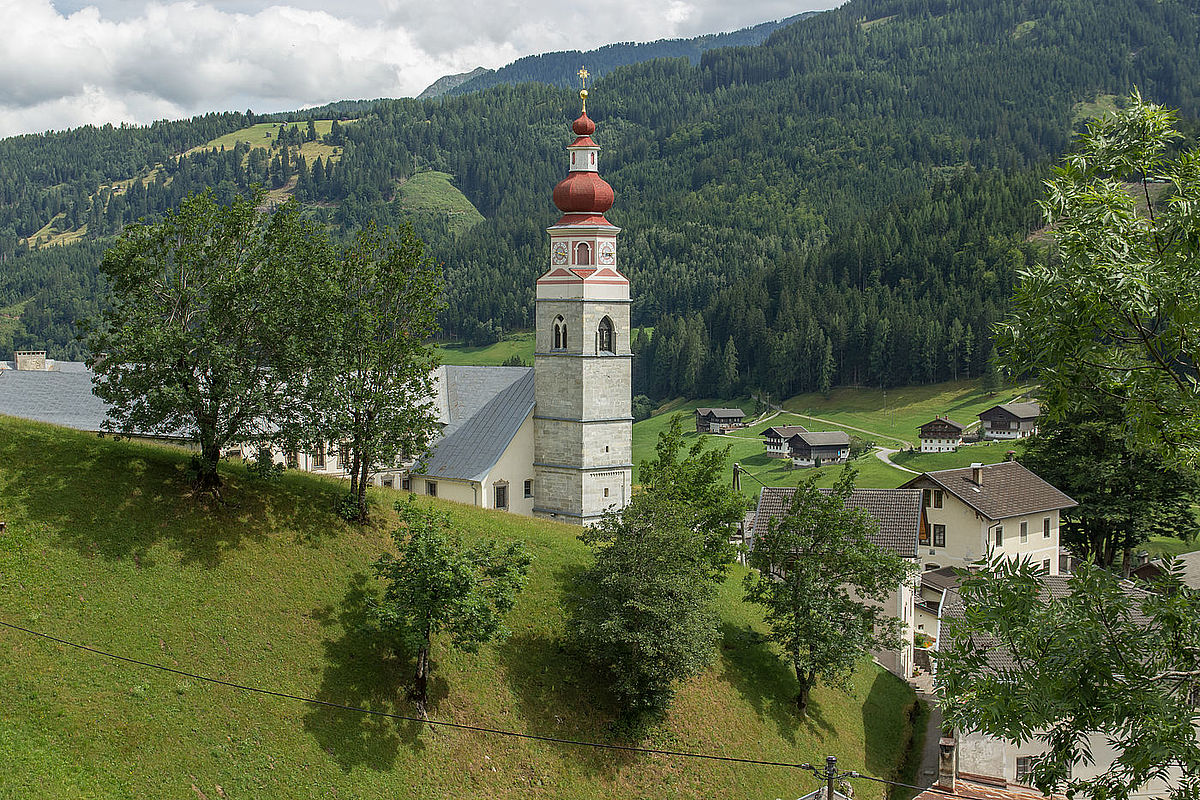 History of the place of pilgrimage, Maria Luggau

Given the task of building a church whilst asleep

In 1513, a country woman from Luggau, named Helena, dreamt she had been ordered to build a church in the wheat field where she lay. Although she met with strong opposition, she managed to purchase a wooden statue of our Lady of Sorrows and in 1515 she began to lay the first stone. However, although the church was built, it needed a miracle.

After an accident on horseback, a disbeliever managed to save himself thanks to the vow he made to build a church. The construction work could finally begin. Throughout its history, the Basilica has seen good and bad times.

By 1520, a Gothic church existed in place of the tiny church Helena had built. A fire partially destroyed it and between 1730 and 1788, restoration work rebuilt a Baroque parish church on the old ruins dedicated to the Madonna of the Snow. We can still admire the style today, with its magnificent frescoes, stuccoes and the image of the Madonna of Miracles above the altar. The high altar dates back to 1749 and was made by Paul Huber, a carpenter from Innsbruck.

In 1986, Pope John Paul II raised the status of the church to Minor Basilica and it is the only Basilica in Carinthia. 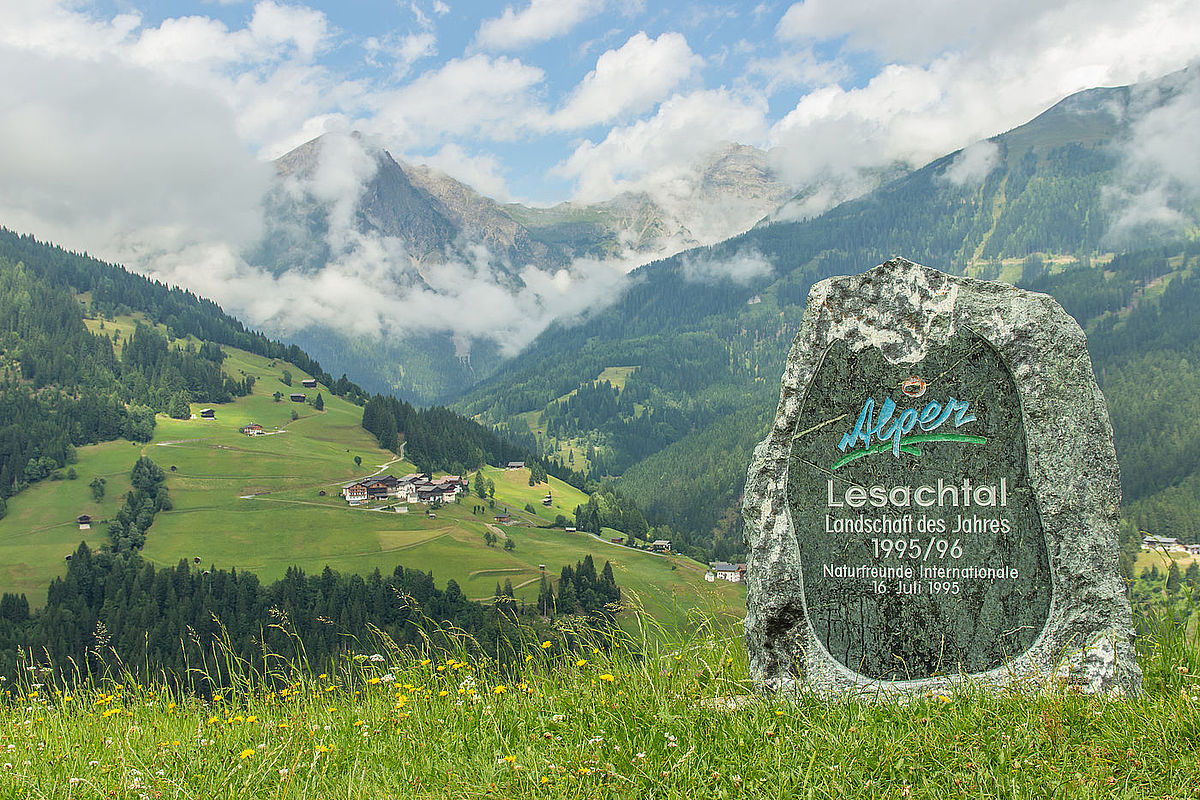 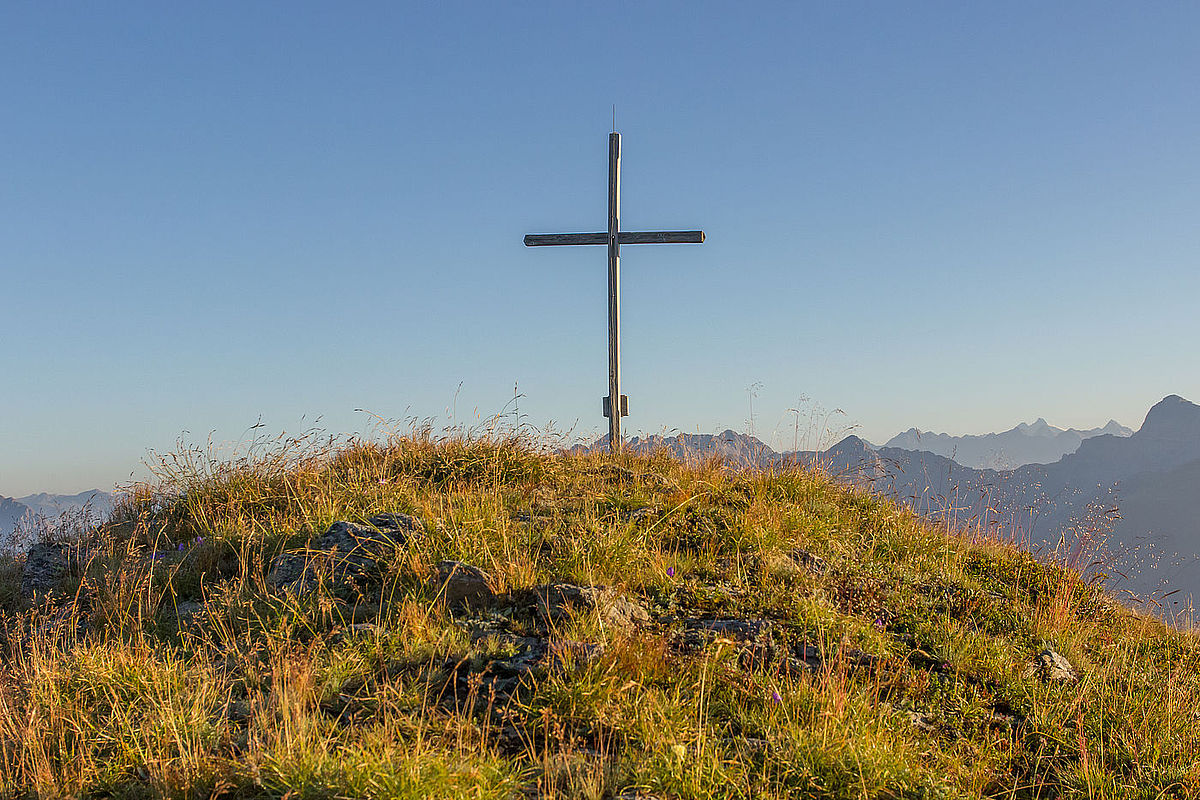 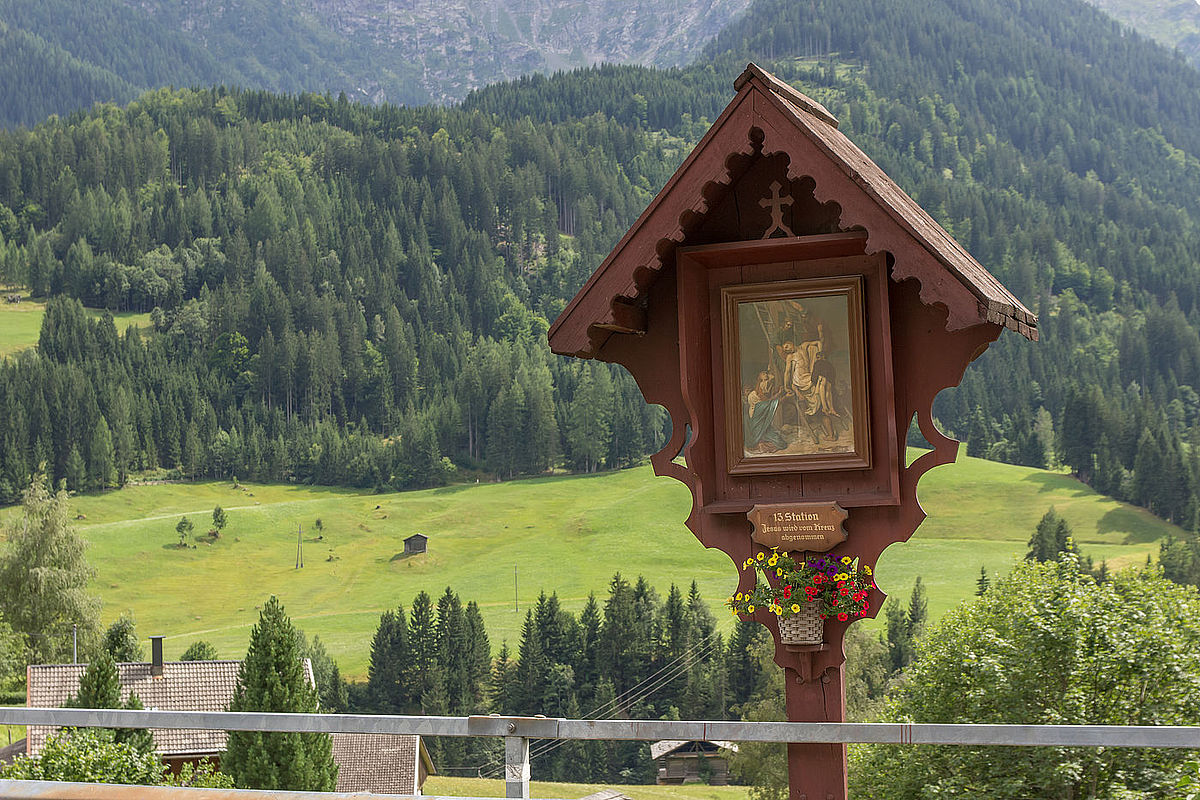 An important tradition of pilgrimages

There is a long, important tradition of pilgrimages. Back in the 16th century, this extremely beautiful, wild area was known as a destination of pilgrimage. Many people face a long, impressive walk on foot across high mountainous areas to visit the Basilica of Maria Luggau.
12 sacred roadside aedicules lead from east to west to the Basilica of Maria Luggau.

You can find further information about Maria Luggau, the place of pilgrimage, and the Basilica on the website of the Convent of the Servites in Maria Luggau.

Find the energy you need for everyday life in the peace and simplicity of the Lesachtal Valley.

We will be pleased to give you information regarding the attractions and places to visit and all the opportunities a pilgrimage to Maria Luggau and a stay at Der Paternwirt can offer you.